wantfastcars wrote:Okay I had kind of an idea for a two-wheeled "car"

pls no bully my art skills, I did that with a mouse in Paint in about 5 minutes

wantfastcars wrote:Okay I had kind of an idea for a two-wheeled "car"

pls no bully my art skills, I did that with a mouse in Paint in about 5 minutes

"cough" extreme g race "cough"
Science WINS again!!!
Then they opened a portal to another dimension and kidnapping the locals.
The pissed locals are head enough and strike back.
and then... ALL HELL BREAKS LOOSE

Hey firebugs was my childhood i loved it, i never knew of rollcage till recently.

Hey firebugs was my childhood i loved it, i never knew of rollcage till recently.

We have a thing for firebugs in our steam group xD Nearly everybody hates it xD
FOR THE RAZIELIM!

And with a pot of F*ckedUppery
Powerful Cthulhu created me

One of the first players in

hmmmmm....it could be instresting if actual vehicles can be driven by set the car in vertical mode, useful for tight tracks or specific points...
Top

Not really a fan of three wheeled cars. In my opinion it takes GRIP too far away from it's Rollcage roots no offence of course.

wantfastcars wrote:I still like the idea of two wheels in the front and one wheel in the back, with the jets on the sides of the one back wheel I thought about it and decided to sketch a vehicle out and see if it would look fitting for the game. (Yeah I know the wheels are wonky)

I call it the Cygon Cyanide and its my own Original Characar, do not steal

The only problem I can see three wheeled vehicles having is physics problems, seeing as how weird unreal 4 physics are and they might not be fun to drive, on another note the back wheel wouldn't move either with jet engines clasping it in place. The jet engines could instead divert power to one side instead of making the wheel turn, would look cool.

Welcome on the forum DudeMcPunchy

I'm with RacR268 still, yes it would be a departure from RC roots (which could be fine) but it gives me a "weak" perception for such vehicules. I don't know, there's something that I find unattractive. More wheels eventually (like 5 or 6, though it's silly), but 2 feels to me like something is missing.

Opinions will be opinions eh ^^'
Top

Its a intresting idea and i have a weak spot in my heart for crazy ideas.

But i think three wheels gives it quite the toylike look. Mostly because of the big frontwheel. Reminds me also of the bikes in Warhammer 40K and the bikes are one of the things that i really dislike about 40K.
Top

Would rather have one big wide wheel at the back and two up front.

Or a two wheeled one with fatass tires. I've wanted that since the first year in development.

This is just me talking about this stuff, not committing

I personally think that diversity is a really good thing. Three wheeled cars could have the ability (and two wheeled even more so) to out handle the 4 wheel cars with the weight savings of missing tires (even if the ones left are bigger, they would have to be a lot bigger to make up for it). Plus, if you want to balance them back out weight wise, then you would be making them heavier with extra armor over the normal cars. That and the different wheel set ups means that the artist have the ability to get really creative with their designs.
Top

I've always wanted to see a vehicle like my old Terrainiac RC car in a videogame. 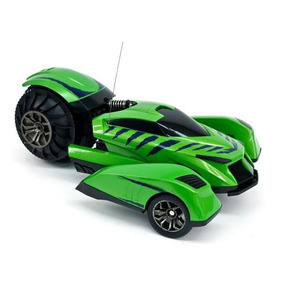 Obviously it'd have to be changed a bit but... lol
OK, tell it to me straight... in Rollcage Stage II for the PS1... was Winter Wonderland II even possible to Gold Medal...?

Retreating is Running Away. Falling Back, however, is simply Advancing in a Different Direction.
Top

Same for me, i never liked three wheeled vehicles.
Top

Hmmm... we have some doubters... in all honesty though... what don't you like about them other then they aren't iconic or are in Firebugs (never played it). I think that a game as insane as this should have some diversity in the vehicles that are available... be it 2, 3, 4, 5, 6, or more (no idea how more... that would be pretty weird looking... 7 wheeler anyone?)

I mean in this combat racing scenario that the game is based in, people's lives are on the line (right? I mean... when these things blow up people die don't they? Am I wrong about this?) So everyone, including the vehicle designers, would be looking for every slight edge they could get. There also doesn't seem to be any rules for vehicle construction either (that I have heard of) so if they thought more or less wheels would give them the advantage, you can bet they would have done it even if in everyone else's eyes the idea is just daft.

Look at the first driverless vehicle race... when people were building vehicles to drive across the desert to win some X prize money (or something like that... I think the prize was like... 10 mil or something) most people went with trucks, Humvee's, SUV's... or something of similar caliber... but one team built their self driving vehicle... on a dirtbike. Most teams couldn't get their vehicles to drive 1000 ft without crashing and these guys hat to try to figure out how to keep theirs from falling over as well. I think the team's name was ghost rider (unironically)

Another story along those lines... I used to be a Boy Scout when I was younger... and I loved making pinewood derby cars each year... I never won, but that's besides the point... I loved building them. Well, one year I saw someone make a very strange car, a design that I had never seen before. They had cut their block of wood down to almost nothing and then spaced the wheels extremely unevenly. They put the two drivers side wheels right next to each other in the middle of the block... barely a millimeter space between them, and then spaced the passenger side wheels as far apart as possible. This was an extremely odd setup but it was just a pinewood derby, so... I didn't think anything of it. Hilariously, it was too light to pass inspection, so the weird solution that the dad came up with was to zip tie a hotdog to the top of the car... perfect weight (I literally can't make this up). That stupid hot dog car won every single race... every one... Why? Apparently the wheel spacing was so drastic that the way the car was sitting it was only riding on 3 wheels at any given time... sometimes balanced on just 2 during transitions. This meant that it had far less rolling resistance than every other car there and gave that dumb hotdog a crazy advantage... I will never forget that.

Dude I feel the passion

I wouldn't be opposed to two or three wheelers appearing necessarily - but I would want to blow the hell out of a three wheeler! I'm racest that way

All the more incentive to have one in the game! Gives you a target that you can mindlessly bully every race!
Top

The game is getting a 6-wheeled vehicle soon. Just think of it as 2 3-wheeled cars slapped together :'p
GRIP forum rules, 'cause I'm a boring fluffybunny.
hao 2 do reket boost ~Dups