Queadah's pillow to shout in

Discuss everything else not related to Grip here, except politics/religion. Those threads will be closed.

Queadah's pillow to shout in

Here's the WROB3L we know and love!

+1 on wheels flying off screen buddy

And what's with the general feeling surrounding GRIP development that things should not be over the top?
WHAT. THE. HELL. is wrong with you people! Freaking multi-ton-flip-flop-mach-breaking rigs crushing your skull, what did you expect? Why even bother with video games at all? Where's the excitement?
If I want effing boring, I play mfcking RL Sudoku b*tchez. What's the point.
F*ck me.
Top

Things need to stay believable (which is very different from realistic) imo. Nukes eradicate entire islands. If one would be used in an orbital prime city the entire city would be obliterated. No government could tolerate an underground organisation having weapons of mass destruction this powerful. It wouldn't just result in them being hunted by the police, but full out war.

Other things like a third pick up slot or the slomo thingy would fit in nicely into the extreme, but still grounded universe of grip in my opinion.
Top

I feel I must elaborate
+1 OnLY, the blast only interested me as a push-back excuse for all leaders.
To what degree I find the pic below believable? I don't even know 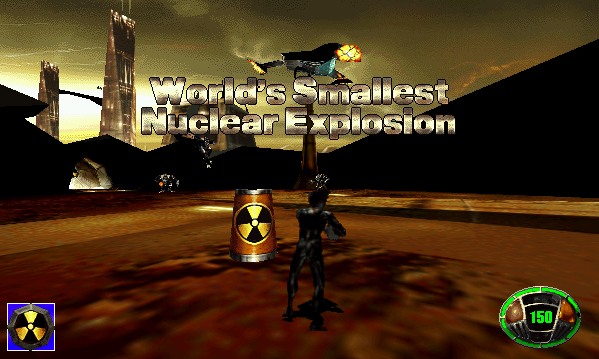 *sigh* Now now, my only wish for GRIP is that it doesn't hold its punches and fulfills its rightful place on the shelves as an action packing racing game with longevity:
Top

Some thing I fear is, that if we have those extremely powerful weapons they will overshadow the cars and how the (probably lunatic) drivers handle them, which to my understanding should be the most extreme and impressive thing. It would turn into impressive technology instead of impressive drivers and how thy use whatever they have for the races.
And for the campaign I'd really like to see a diverse group of drivers like aliens, cybernetically enhanced humans (or aliens

The smallest nuclear explosion with a proper critical mass explosion (not dirty nuklear bombs) would about equal with 10-20 tons of TNT.
The GBU-43/B also known as "mother of all bombs" has about 11 tons. Its aftermath can be seen here.
With this we still ignore nuclear fallout.
Top

Re: As you wish

"Waaah, people don't agree with me. I want edgy syringes in my racing game and I'll hijack this thread to complain like a little girl."
GRIP forum rules, 'cause I'm a boring fluffybunny.
hao 2 do reket boost ~Dups

Ahaha. A rant is a rant, you of all people surprise me Broscar. Go ahead and shoot I'm good public
Top

Look at the road-holding on these babies. Clarkson would cream himself.

Here's my little pillow to shout in !
Skytrack-style ramps
The lot of em. Why are they popping everywhere ? That same asset everywhere regardless of the planet... FFS let's not abuse it like a cheap "go-to" for every track design:
Re-using the same asset everytime clearly has benefits, but please, make us dream with some diversity !! E.g. Norvos clearly calls for something else than Skytrack-style ramps. They're effing everywhere
C'mon people

Ya see, I do agree with the more natural look of track assets, but since they still have to modify the base flow on a lot of the tracks, I guess it's just a lot easier to use the same assets, ramps and track platforms everywhere. Don't forget, that the base stuffs (layout, flow) of the game comes first, and those HAVE to be so awesome, that it's still fun to play for the 1000th or 99999999th time aswell. Everything else is cosmetics, and can be addressed later on. I think it's better to have more FUN and tought out released tracks in the beginning, than a few, fancy (at first, but you'll get bored of it, and eventuallywon't pay attention to it anymore anywayz) looking ones. Ya see, more REAL content -> more REPLAY VALUE, and that shall be the goal. The game looks awesome as it is even now, and people tend to forget that a lot of stuff even tought looks finished is still WIP. Patience is a virtue.
Top

Queadah wrote:Here's my little pillow to shout in !
Skytrack-style ramps
The lot of em. Why are they popping everywhere ? That same asset everywhere regardless of the planet... FFS let's not abuse it like a cheap "go-to" for every track design:
Re-using the same asset everytime clearly has benefits, but please, make us dream with some diversity !! E.g. Norvos clearly calls for something else than Skytrack-style ramps. They're effing everywhere
C'mon people

Return to “Off Topic - No Politics or Religion”